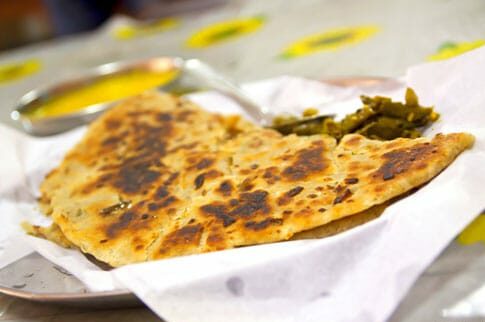 On this week’s edition of Cheap Eats on Dubai92, we spoke about crunchy freshly made onion parathas in Bur Dubai.

The place she shared this week is, in her words, a “paratha dungeon” in Meena Bazaar (Bur Dubai). It’s called Nihal and it’s best to call ahead and take away your treats rather than dine in. They also deliver. 055-2298125 is their delivery number (minimum order value based on distance.)

They have all the usual parathas — potato, mixed paratha, methi (fenugreek) — but the one to get is the koki. Koki is a crisp rich onion paratha that’s specific to the Sindhi community. The texture is a cross between a biscuit and a paratha. They serve it with a side of either yogurt or homestyle daal and some green chillies pickled in mustard.

All right. Today we are gonna walk into a place in Meena Bazaar. In Bur Dubai. It is called Nihal Restaurant, which is a gross overstatement of what it is. It’s not really a restaurant. It is a paratha dungeon, and it is not the sort of place that you sit down and eat. You just order preferably in advance. You take your goods and then you just vanish.

Nihal. N-i-h-a-l. And it is on Google Maps now. So they have all kinds of parathas there, but what they are known for is the Koki. It’s basically a paratha, which has bits of charred onion in it, and the texture is a cross between a floppy tender paratha, the ones that you typically see, but then also a crunchy biscuit. So if you fold it, it’ll actually crack down the center and it’s massive. I struggle to finish half honestly, in one sitting, I struggled.

All right, Tells the price range. How much are we talking?

All right. I have never seen a menu there, but the last time I ordered this massive koki, which was just a couple of days ago, I got the massive koki, three tiny dipping containers of daal. So I asked for extra daal, two packs of pickled green chillies. I was pretty shocked when the guy told me it was 9 dirhams.

Arva, as always, from Frying Pan Adventures. Thank you so much.

Have a scrumptious week ahead.