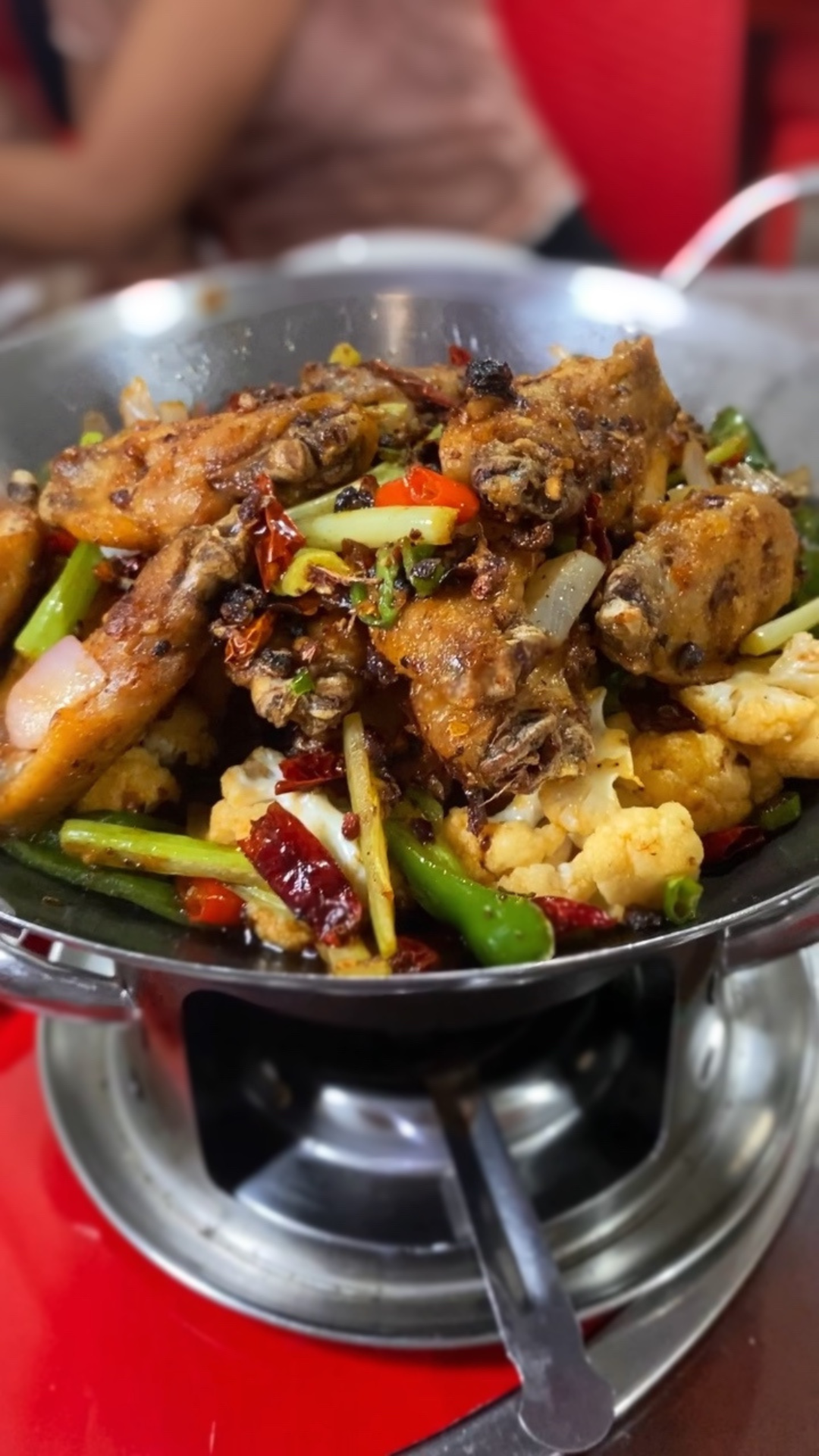 Where to Get the Spiciest Chicken Wings in Dubai

This week she revealed a real ‘shady dive’ of a Chinese restaurant in Deira that does flaming hot but super delicious Sichuan chicken wings.  They are caked with tongue numbing Sichuan peppers and every other kind of chilli the chef can get his hands on — but it’s not just a spice fest. You can taste that lip-puckering citrus of the Sichuan peppercorns and there is an irresistable umami flavour riding through the dish. There’s garlic slivers, celery, cauliflower & potatoes, all of which soak up the lethal chilli oil pooled at the bottom. This dish literally gets deadlier as you reach lower into the pot.

The name of the restaurant is Jing Ding Xuan Sichuan and you can find it right here.

Tune in to the player below to hear the radio segment or read the transcript below!

Jono: Alright so Arva, what have you got for this week.

Alright, so this time we’re going to go to little bit steep on cheap eats, but if you really loved spice, and I mean, the super flavorful sichuan kind of fiery numbing heat, I think these 68 Dirham dry pot Sichuan chicken wings, you can share between two, even three people are totally worth the splurge, even though they are somewhat lethal.

Nats: On the Richter Scale, what are we talking about? Like, on a scale of one to fiery hot?

Arva: I don’t know…I feel like…I don’t know because I feel like spice is so subjective but the fact is that I, Nats I think you know this, I don’t really eat much spice.

Arva: I survived. I’ll tell you how I survived but I did survive.

Nats: Well, will you just say the word spice and Jono’s out of this equation. Like he’s not going to be able to partake in these wings but they do sound tasty McNice I have to say.

Jono: Arva give us the name of the place. And where is it located?

Arva: Alright so the place is called Jing Ding Xuan Sichuan restaurant. I’m pretty sure I’ve missed pronounced that. It’s right across from the old Al Ghurair Mall near Union Metro station in Deira. There’s a massive parking lot with a Chinese restaurant, it has a big sign that says shabu-shabu on the outside and another landmark is that there is a graveyard that’s just a couple steps away which I don’t think is a coincidence.

Jono: Right, now let’s have a quick look at the place inside. Nice and tiny, nice and small. But what’s the menu like?

Arva: Alright so basically they have three menus. And the servers will not be able to help you with any of them. It’s just a little shady dive of a Chinese place that has maybe three or four floors of zero ambiance so expect nothing. But they’ve got a mild Filipino manual, a Chinese menu for the non-Chinese and then a real deal red menu for the Chinese with very, very few translations. They might not even give you the last one until you ask, but that is the one which has the intensely spicy dishes like the Dry Pot Sichuan Wings.

They’re venomous because they are caked with some numbing Sichuan peppers and then pretty much, I feel like, every other chilli that the chef could get his hands on.

Jono: Right, so get yourself some wax poured into your mouth. Head on down and check it out at. So again it’s called Jing Ding Xuan Sichuan.

Arva: …Sichuan, yes. They also stock sweet coconut milk in their fridge and that is what helped me rescue myself because these are the kinds of wings where even though you know, you are slowly dying along with them, they are so irresistible that you can’t stop.

Nats: Hey Arva, I know you grew up here like I did. Do you remember the commercial that went: I like it spicy with a little bit of ricey. That’s all I could think of this entire thing that you’ve told us about is how spicy these chicken wings are that you’ve said we need to go and try out at Jing Ding Xuan Sichuan. Look at me getting that name right.

Arva: Look at that! You did that so well wow!

Jono: Pop the loo roll into the freezer. Head on down, go and check it out in Deira, in Al Rigga. Arva. thank you as always!

Arva: It’s always a pleasure! Have a scrumptious week ahead guys!